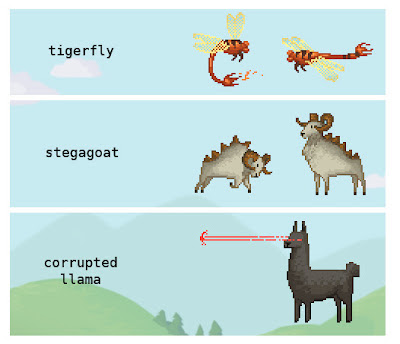 Oops, this was scheduled to post last week, and I just realized it didn't.  A little late for their Kickstarter, but it did succeed, and it's not like blog has any influence anyway.  Oh well, the game is being made, and it still looks cool, so read on...

Crea is a 2D sandbox with RPG elements, to paraphrase their Kickstarter page.  Their FAQ addresses concerns that it may be a Terraria clone.  I mentioned earlier that I liked Terraria fine, but without a narrative or direction I got bored.

What I didn't mention was that there were people working on trying to add a story, or at least RPG-style missions, to Terraria as a mod.  They stopped for many reasons, one of which was the difficulty in modding the game.

I don't think Terraria was intended to be modded.  Not that the developers didn't want people to mod the game, they just didn't have modding in mind when they were making it.  They probably didn't understand how big the game would get, or how many people would want to alter such a simple game to suit their own tastes.

When it was announced that Terraria was no longer going to be supported, there were a lot of fans upset that the developers didn't take the extra time to make the game easier to mod.

A lot of the currently existing mods for Terraria are cool, and I would have liked to see more.  However, there were no promises I ever saw that modding tools would be provided.  I don't think the developers have any sort of obligation, however modding tools can pay off--you never know when a really great mod will bring more gamers in.  Arma 2 and Day Z, anybody?

Now, I doubt that Crea is going to be just a Terraria clone.  But if it were, I'm cool with it.  They're stating a focus in easy modding.  I would love a Terraria clone with easy modding, I really would.  I'm not a modder myself, but I do like mods.

BTW, looking even just at their crafting page it's apparent that this game is not a Terraria clone.  I was looking forward to it even just to see how the community would mod it, but now I'm getting excited for the core game itself.