My mind is reeling (Gumroad)

It's not quite too late for me to be awake, but it's getting there.  <Yawn>  I've been evangelizing for artists to set up their own stores in order to get the biggest possible shares of royalties for a long time.  Pretty much since I became aware of Amazon Web Services and the availability of free plugins to allow many CMS's to interface with it easily. I realized that anybody could set up a streaming Video-On-Demand site with ridiculously low overhead, and if you could set that up on your own, you could set up any digital goods site on your own.  Trust me, I was very into the idea.

So when my friend, who I am currently working on something with, asked me about selling it directly from our own web site, I kind of balked.  I imagine he was surprised at my reversal.  The closer I've gotten to actually publishing works, both personally and through my employers, the more I realize what publishing sites actually do.  For instance, managing returns.  I did a little mail order at my old day job, and I dealt with a lot of returns. I don't like processing returns.  It makes me sad and sometimes angry.  Better to let cold, faceless Amazon handle that junk, right?

Then there's setting up servers, tracking down bugs, etc.  I waste enough time on Blogger just dealing with themes.  When I think about going back to a WordPress blog and dealing with an AWS plugin, along with the inevitable need to hunt down a new plugin every year as my favorite one stops being updated, well, I've soured on the idea a little bit.  But today, as I was reviewing all of the major epublishing sites, their cover resolution requirements and their royalty schedules.   I found a site that listed all of the major publisher's royalty info, here.  Listed along with all of the publisher's info was a brief mention of selling from your own site, through Paypal.  Okay, people do it, but it's still messy, right? I did a quick Google search to see what options were out there.

I have not used it.  I cannot testify to it's utility or...um, disutility.  I only just heard about it a half hour ago.  I've been researching it though, and it looks solid.  Good reviews, anyway.  Every problem I can foresee seems to have been addressed.

Gumroad is a web app that you can use to sell digital files.  Ebooks, comic books, videos, apps, plugins, whatever.  Presumably maps, tattoo templates, self-portraits and religious pamphlets as well.  You upload a file, set a price, and they give you a link that you can put on your website that you can use to sell whatever it is.  Gumroad takes 25 cents and 5% of the sale price.  Gumroad allows pay what you want pricing, and also allows setting a price floor while still accepting amounts over that base.  If I have this right, then:

Note: Amazon only pays %35 royalties for any books cheaper than $2.99 or more expensive than $9.99.  For everything else it's 70% royalties.  Except, they just added changed it so you can get a 70% royalty on a book at any price, so long as you sell it exclusively on Amazon.  Fuck that noise.

It's a very cool system if it works as advertised.  I guess I don't have an accurate idea of how much file hosting costs, because they also do streaming video at the same cost of 25 cents and 5%.  They do have a file size limit of 4GB.  Perhaps as a general trend price scales with file size, I don't know.

It just occured to me, how could a system this simple handle ebook revisions?  But alas, they've got this covered as well.  I wonder if the updated file uses the same link as the original, that would be nice, but not necessary.  I actually wonder if this (multi-file projects) would allow you to add more files after being for sale, so you could keep every revision in the folder as you update them.

The thing that really has my mind reeling right now is the clash between fantasy and reality.  "OMG, I could make so much money!"  vs "This only works if a creator can build a stable, independent channel between themselves and their audience.  You still have to bring traffic to your web site."  Because that's the big hurdle.  Perhaps it's because I read Konrath's predictions for 2014 earlier today, one of which is "Visibility will become harder." Gaining visibility is hard enough already, I thought as I read that section, but he's right.  It will get harder.

I haven't published anything yet, but hopefully by the end of January the company I work for will launch their website and start selling on all major digital stores (and possibly via Gumroad too, if further research holds up).  There will be a few books for sale right away covering many topics, and it will be interesting to see how much traffic will comes in just from random web searches.

Anyway, it's super late now, I should be in bed.  I was hoping to fire this off and keep reading up on Gumroad but this took longer than I though, mostly because I kept having more questions and paused writing this to continue researching them.  So I guess its win/win?

Just did a little more Googling and found this.  It's over a year and a half old but hopefully this ideal still prevails at their company: 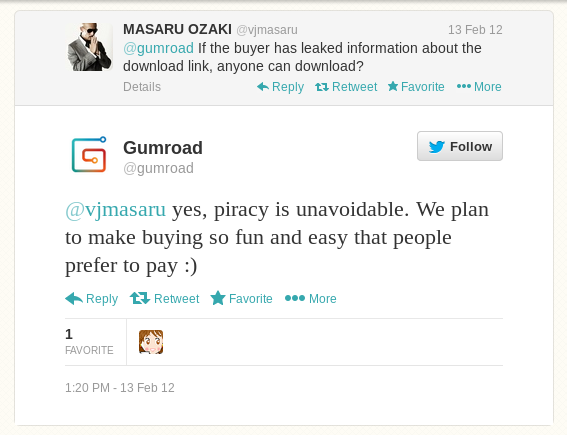 I actually like the idea of links being persistent because it (hopefully) means links won't expire, so if someone loses their copy they can re-download it later using the link that's presumably in their original confirmation email.  Also, you can email a copy of an ebook to a friend just as easily as you can email a link, so please don't worry that this leak is somehow going to sink the whole boat.

Hmm, have I ever written a blog post praising something this much even though I've never actually tried it?  Actually, I bet I have, many times.  The netbook?  The Nokia N900 or the first Samsung Note?  But I am anxious to try this service out.  More fuel in my work tank, I guess.  Oh look, it's time for bed, an hour ago.

David
Posted by David (thriceberg) at 3:47 AM