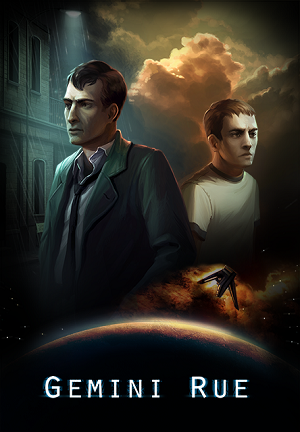 I just purchased Gemini Rue via the most recent Humble Bundle two days ago, and I beat it last night.  The first night I played it very late, and decided to go to bed at a reasonable stopping point.  The next night I started probably an hour before bedtime,  knowing it would be keeping me up.  I beat it a few hours later, so I wasn't up too late.

All I can say is what other people have said.  It's a great point-and-click adventure, with all of the genre's best qualities and it's worst trappings.  Luckily the trappings are small and far between, and don't even come close to outweighing the good.

The game is beautiful.  The story was great.  The atmosphere was real, alive. I turned the dialogue portraits off because I didn't feel like they fit with the overall art style very well.  I really want to see other things set in this universe, which felt rich and full for how little I saw of it.  The controls were sometimes iffy.  Sometimes clicking the side of the screen with the text "exit" coming up would cause you to walk to the next screen, sometimes it would cause you to stand near the end, requiring a second press. Sometimes clicking to manipulate an object had the player character automatically walk across the screen to fiddle with it, sometimes they said "I'll have to get closer," requiring you to walk them over and click on the object again.  I don't know why sometimes it was automatic and sometimes it wasn't.  Going through doors required a surprising amount of clicks.  That's it though, that's all my complaints.

It's worth mentioning that I played the whole thing on my Android phone, and the game worked much better with the smaller form factor than I had any reason to expect.  I hope that Wadjet Eye releases more of their games on Android.  I've heard good things about the Blackwell games, and I own some of them on Steam, but point-and-clicks are the closest games get to reading a book, and I kind of feel the need to play them like I read:  moving from position to position, from bed to couch to recliner.

I'll also own up to the fact that I sough help from a walkthrough maybe four times.  It was a good one that avoided spoilers ("Open the door, talk to the girl, watch the cutscene.")  My biggest problem with point-and-clicks the requirement to conform, not to another style of thinking, but to a very contrived logic specific only to that individual game.  Gemini Rue isn't as bad as say Sam and Max Hit the Road, their LucasArts point-and-click.  I didn't need the walkthrough, I just got impatient with the roadblocks that I would run into.  I made a decent effort to try everything I had with everything else and everyone I could find before I went to the walkthrough.  The biggest issues I had I think were caused by not doing things in the order the game wanted me to.

So my verdict: buy it.  If you like sci-fi stories, if you want to spend some time thinking about the nature of a person's identity, and if you like point-and-click adventure games, buy it.