Google is Getting Problematic Part 2

A few days ago I logged into Blogger planning to write this post.  Then I saw Google's new sign-in page and ended up writing about that.  Here's the article I originally intended to write.

I have a few Google accounts.  I wouldn't have so many if I ever got any indication that there were policies against it, and in fact there are many indicators that's it's encouraged.  For instance, a few years ago they added the ability to sign into multiple accounts at once.

So I have a few accounts, and some of them were under fake names or using my "online" names just on a lark.  They were free email accounts, I only really cared about the email address, so the name I attached didn't seem to matter.  A while ago, just for consistency's sake and for potential account recovery issues, I changed the names on most of my accounts to my real name.  Then Google got really aggressive with pushing Google+.

If you have a Google account, even if you only use it for email, or signed up for it when you activated your Android phone but don't really use it, there's a good chance you have a Google+ account.  I noticed, for instance, that my dad has a Google+ profile, which he doesn't use and probably doesn't even know about.  A few of my accounts have Google+ profiles attached, when I only intentionally set it up for my single primary account.  For a while there were two Google+ accounts with my name on them, because I didn't realize that one of my secondary addresses had an active Plus profile attached.

I noticed when I was setting up an account for one of my relatives (so they could sync their photos with Google Drive) there was a screen you couldn't skip or get past that seemed to auto-create a Google+ profile for you (name changed to protect the innocent). 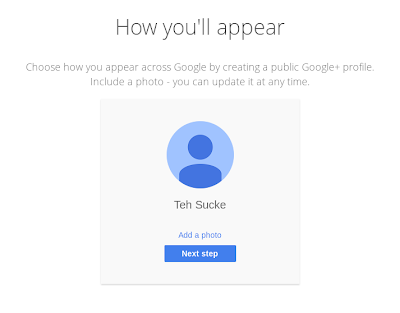 I suppose I could have closed the browser and logged in later to avoid this screen, but I imagine they'd just try to push it on me again.  I hit "Next step," logged out and then logged in with another account to see if there was a Plus profile for the account I just created:

And there it came up in a search, second from the left.

Can I stress how shitty this is?  Reminds me of Mean Girls: "Stop trying to make fetch happen!"  A lot of people are using Google+ and like it, but a lot of people want nothing to do with it, and automatically signing them up is just creating zombie accounts that make the service look abandoned.  Trying to force it on people will not generate one iota of good will.  Considering Google has been losing good will by the truckload lately, you think they'd try and be a lot more user friendly.

I'm also a little concerned with their new name regulations.  I changed the name of my secondary account (the one I use with Blogger, coincidentally) because it magically had had a Google+ profile created with my real name, so there were two accounts using my real name.  When I changed this secondary account to a fake name (I wanted to make it "thriceberg", the name I use online) it wouldn't let me.  Basically they've set it up so only real names (or names that for the format of real names) work.  This means no one-word names (So Teller is screwed).  First name can be initials, but not both names.  They won't accept "The" as a first name.  I went with DC Thriceberg, using my initials and my online name.

When I did this, Google warned me that because people don't change their names very frequently in real life, they limit the number of times you can change your name on their site.  They didn't specify the limit anywhere that I saw, but other sources say you can only change your name three times every two years, which in itself seems fair.

Anyway, I've gotten it mostly sorted.  Personally I think this obsession over using real names online is silly, and I certainly don't believe that it has as large of an effect on accountability and discourse as people think it does.  But the policy is sort of easy to skirt for the time being.  If Google gets any worse about it I'm sure a suite of web apps will be released by a company that won't try to shape your privacy boundaries or online habits in the way Google does.

In that spirit, I have been lustily eying ownCloud for a while. It replicates all of Google's services except for Voice, as far as I can tell.  And it's free.