I'm trying to get myself on a daily writing routine, which has had mixed results so far.  But if I'm going to take this seriously, ergonomics is something I should spend some time researching.  Hell, even if I don't write a lot I spend so much time in front of a computer screen, I should pay a bit more tribute to getting my workspace right.

Concession one was that my screen should be at eye level, a bit of a problem when I'm using a tiny netbook to do most of my writing.  But a wireless keyboard and any sort of box can fix that.  (I also have a second solution which is working nicely in my bedroom, which is to use my television as my primary monitor, using it from across the room.  I have to scale the font size way up, but looking say twenty feet away for extended periods of time is supposed to be easier on the eyes than looking say a foot away for similar amounts of time, so hopefully a screen eight feet away will be a little better as well.  I'm not a doctor, a million doctors may be rolling their eyes at this right now, but it's not like my eyes have fallen out of their sockets or anything as a result either). 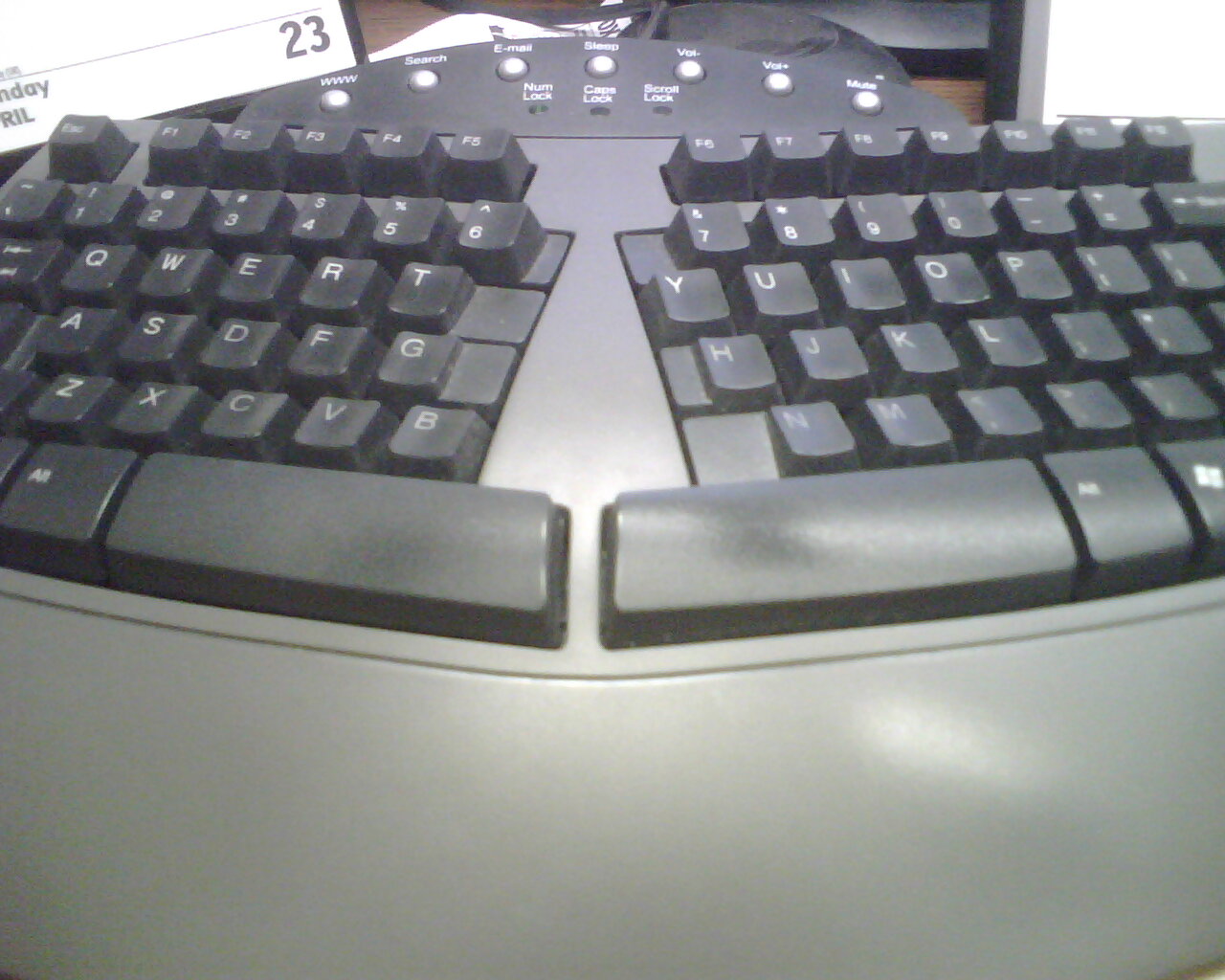 Okay, so I'm buying a keyboard, what keyboard?    I'm not interested in those split super-ergonomic keyboards (see picture above - source).  I've used them a little at work, not a fan.  Honestly I feel like the biggest boon to my hands would be just making a point to type as gently as possible.  Back when I wrote with a pen and paper like some kind of super-advanced caveman with access to advanced processing and mass production facilities, I noticed I wrote as if I thought the harder I clutched the pen the faster I would go.  Not so.  Buying better, smoother pens helped, but ultimately I had to keep reminding myself to go easier on my grip until I rewrote the habit.

Alternatively, I read one article on ergonomics that said just having multiple dissimilar keyboards that you switch between can help a lot.  The type of injuries I'm trying to avoid here are repetitive stress injuries of course, and a bigger, smaller, or differently shaped keyboard could help reduce the repetition.  So, want to know what kind of keyboard I bought?  Spoiler alert, look at the title of this post!

I've been using the Microsoft Arc keyboard for a month now.  Here is a random assortment of thoughts: 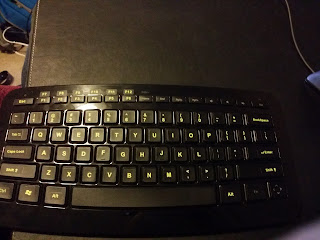 Above is a picture of my keyboard. I applied some reflective yellow stickers to increase the visibility of the keys.  Note that this picture is taken with a flash, but it does highlight the difference between the stickers and the dull matte original labeling (which you can see on the top and bottom right corners of the keyboard).  The original decals look okay in this picture, but consider the flash and the contrast ratio between the decal types.  Imagine using this in low light. I wish manufacturers would realize that they don't even have to ship backlit keyboards, just make the key decals bright and reflective enough to be illuminated by a dim monitor.  They really do make a difference.

I like the action, the keys are fairly quiet but springy.  I might like a bit less resistance but that's probably because I'm more used to flimsy laptop keyboards. My real problem is the lack of Bluetooth---it means this device will stay at home when I travel, and a cheaper, backlit bluetooth keyboard will go with me, so I can break it out to continue work on my tablet if and when my laptop dies.  A backlit bluetooth version of this keyboard would make me a rabid evangelist in spite of all other flaws, because the design and feel of this keyboard really is quite good.

By the way, another tip I saw on saving your hands if you type a lot, don't hit two keys with one hand. Yeah.  So when you do CTRL+ something or SHIFT+something have one hand hit the Control or Shift keys and have your other do the other key, as I just didn't when typing them in caps.  It's a hard habit to get into, because using the shift key is usually so fast I don't think about it until half a sentence later.  Also, remember in your school's typing class how cool it was when you realized how many keys you could hit with one hand, or how far apart two keys could be and still be hit with one hand?  Well I do, and apparently that was me flipping off the future.  Conform to mediocrity, as I should have done!  Conform!  Also never do CTRL+ALT+DELETE unless you put a glass or something on the delete key, and don't spill your drink on the keyboard either.  And don't sue me if you do.  Also don't sue me if ergonomics ends up being less of a science than homeopathy.

Well heavens, my initiative to write more is working, look at all these words!  Can you feel the power?  Let me just make a note of this progress...  Oh, it seems that on my list of activities, blog posts are considered to be borderline stalling and don't necessarily count as "productive behavior". Well isn't that just the shits?   I blame you, Microsoft!  And Google, you know what you've done!

Ok, I guess it's back to stalling in other online spaces.