Everybody and their dogs are talking about the Steam Controller.  I happen to be obsessed with controllers, for two reasons:
1)  It's hard (though not as hard as it used to be) to find a decent Bluetooth controller, one that I could use with both my phone and my PC.

I can say with some confidence that the best controller I've used is the XBox 360 controller.  I like the feel of it, I like the configuration of it.  Note that the PS3 controller is probably just as good, it's just a feel issue for me, and the comfort in my hands.  There's also the issue that PS3 controllers, despite using Bluetooth, have no real Windows (or Android) support where the 360 controller at least works with most games on Windows. No 360 Android support either, but they don't use Bluetooth so you'd have to used a wired controller or some type of dongle anyway.  There are some companies that make "premium" controllers based on the 360 controller's design, but I haven't dropped the money on them.  Nor have I tried the SpaceOrb 360, an old PC controller that requires a special intermediary board in order to plug it in over USB.

To be honest, if a controller was ever going to compete with a keyboard and mouse, I thought it would be one that had either licensed or ripped off the SpaceOrb, simply because it's design makes sense.  It's somewhat large (allowing more precision but probably slower to control as a cost), it provides resistance to movement, and I've heard great things about it online.  But Valve has gone and made a new gamepad in the other direction, using trackpads.   Using a trackpad for gaming has probably been tried by every gamer who has owned a laptop, and probably quickly abandoned too.

The Xperia Play (gaming smartphone) uses tiny round touch pads in place of analog sticks, and most people hate them (though this guy seems to quite like them, and I do get his point).  I'm sure other controllers have tried them too, but I doubt it's been to any great success.  To be honest, if you had told me that anybody else had made a revolutionary new controller that uses trackpads I would have blown a raspberry and rolled my eyes.  Except it's Valve.  Valve has loads of money and they don't mind reworking and reworking something until it works.

Valve stresses many times that their trackpads are very high resolution.  They admit that you don't get the same kind of feedback you would with analog sticks, but they seem to imply that they'll help remedy that with haptic feedback.  Very, very good haptic feedback:


It is a higher-bandwidth haptic information channel than exists in any other consumer product that we know of. As a parlour trick they can even play audio waveforms and function as speakers.

There are sixteen buttons on the Steam Controller.  There will be a touchscreen that, when you activate it, also overlays over the game on your monitor, so you can keep from getting killed while you look for the right menu item.  There's no top-down view of the controller, so I'm not sure if there's two shoulder buttons, but each shoulder has two functions (I think I worked this out, see the bottom of this post).  In the Portal 2 sample button mapping, the right shoulder can send a left mouse click, or an upwards mouse wheel scroll: 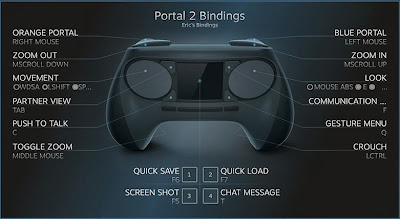 I like to sit back sometimes, which controllers let me do.  If my back is giving me shit I like to lie down on my bed with my laptop on my nightstand and play games with a controller.  But controllers suck, and they're imprecise, and make me feel like the klutz that I am.  I tried to play Max Payne 3 with a controller and had to switch to a mouse immediately.  I later discovered that Max Payne 3 slows down your cursor the closer you get to an enemy, which is probably the wickedest prank any large company has ever subjected the masses to (it does the same for mouse controls too, but eventually I figured it out and disabled it).  Boo! to controllers.  If they weren't so damned convenient we'd have landfilled them years ago.

Quick side note: One things controller can do amazingly well in addition to platforming is space combat, something I once worried had died with the joystick.  Except, space dogfighting games have kind of dropped off.  I think there are a few indie ones coming down the pipes, but no big cross-platform space games.  Darkstar One was good with a controller, I had to map everything myself, but it worked.  Where's our X-Wing and Tie Fighter HD remakes?  A 360 Controller would do them quite well, I think.

Okay, now here's why I'm excited about the Steam Controller:

-No thumbsticks.  My biggest worry when I toss my 360 controller into my backpack with my gaming laptop is that the thumbsticks will be held in one direction for too long and mess up their calibration (and one big problem 360 controllers have is losing calibration).

-It emulates the keyboard and mouse, so it can work with games that don't even properly support it.  That was my biggest worry, waiting for all the games out today to patch in support.  But no, they've got you covered.  They're even giving you a configuration tool that lets you see other people's profiles and use them.

-Valve designed it.  If you're not excited, then you don't know how they work.  Seriously.  Just mail them your money right now.

-What wireless technology will it use?   I'm hoping for Bluetooth.  The 360 controller needs a dongle to work with my PC.  If it's Bluetooth, I won't have to worry about traveling around and losing a dongle,  and that will be nice.

-How much will it cost?  This is a big deal for a lot of people.  A lot of people seem to think $50 is too much for a controller, but I might be willing to pay more than that if the build is good and I think it'll last.  Let's be honest, I'm probably going to end up buying this thing no matter the cost, so please don't hit me too hard, Valve.

-How will it do with, say, Super Meat Boy?  Platforming and space combat games may be the two genres that I'll need to keep my 360 controller around for.  I hope not, but we'll see.

-Are the triggers on the shoulders analog?  A lot of games with controller support utilize the 360's analog triggers.  Alpha Protocol's excellent lock-picking comes to mind.  How would that work if the triggers weren't analog?  Of course, it's going to require a complete remapping anyway, there's no A, B, X, or Y buttons, after all.

That suddenly worries me.  What of quicktime events?  What of games that require hitting "x" repeatedly?  I know it'll just require the shift key or something which will still be mapped to the controller, but that could be confusing.  Honestly, I'd be fine if developers would just dispense with that BS to begin with.

Actually, now that I look at the picture of the front and back there does appear to be two separate shoulder buttons from the rear view:

At least, there's a line separating what could be one button into two.

Anyway, there's my thoughts on the Steam Controller.  Hope it's out soon, I can't wait to get my hands on it!